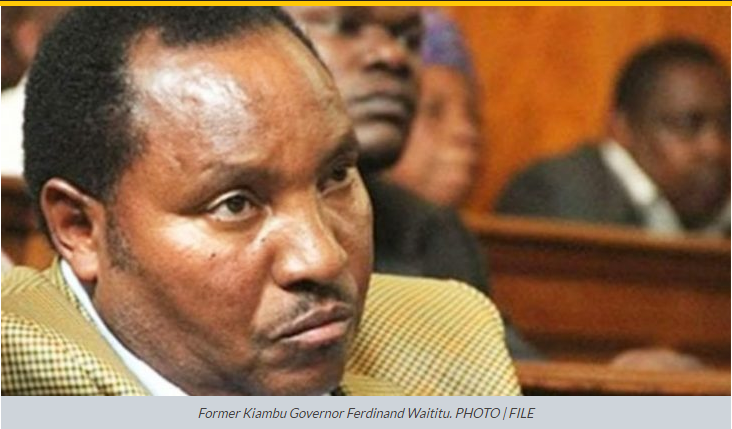 Former Kiambu Governor Ferdinand Waititu is on the spot for allegedly spending up to Kh21 million On foreign travels in his first year in office.

Some of the trips taken by Waititu and his Executive were to ostensibly attend business forums and meet potential investors.

Trips were also designated as a benchmarking mission on water, environment and natural resources management, which had no value for money.

Waititu, who was ousted from office over allegations of abuse of office, gross misconduct and incompetence, spent the money on trips to Dubai, Johannesburg (South Africa), Abuja (Nigeria), US, China and Slovakia.

It has also emerged that taxpayers shouldered an extra cost due to flight cancellations and change of travel dates by the then governor and his delegation.

Waititu has also been fingered for allegedly single-sourcing travel service providers to cater for air tickets contrary to Procurement Regulations.

Damning revelations are contained in the latest audit report by Auditor General Nancy Gathungu for the County Executive of Kiambu covering the financial year 2018/19.

Reports emerged two weeks after similar ones indicating that former Nairobi Governor Mike Sonko spent Sh4.09 million from the county coffers to hire 33 armed police officers to provide him with round-the-clock security during a threeweek trip to Mombasa in 2018.

Auditor also revealed that Waititu travelled to the US with three officers to attend the National Governors Association 2018 Summer Meeting held in Santa Fe, New Mexico between July 18-22, 2018. Interestingly, Waititu and his team did not travel to Santa Fe while in the US.

Travel and accommodation costs totaling Sh2.6 million were incurred during the trip. However, records on travel allowances paid to the delegation were not presented for audit.

Records indicated that the dura China Africa Cooperation meeting held in September, 2018. However, the firm was procured through single-sourcing contrary to Procurement Regulations.

Further, Sh72,888 paid in additional air travel charges was incurred on account of six flight changes on the return journey from Beijing.

“In the circumstances, the accuracy, validity and value for money on the expenditure incurred on the foreign trip to China could not be confirmed,” the Auditor said.

Gathungu has questioned a sum of Sh3.4 million spent on air tickets for the former governor and three officials who travelled to China from 21 to 30 December, 2018.

The trip was designated as a benchmarking mission on water, environment and natural resources management. Travel expenditure Travel expenditure records further indicted that an air travel services provider was paid Sh1.098 million to buy air tickets for various county staff for travel to Dubai, Johannesburg and Abuja during the year under review.

In both instances, the firms appointed to provide air-tickets were not among those that Management had prequalified to provide the services.

“In addition, allowances paid to the officers as well as other supporting documents, including invitation letters, approvals for the journeys, copies of passports and boarding passes were not provided for audit review,” the report said.